It is the beginning of 2020 and everything was going well at Pyrotex HQ, large quantities of stock was coming in from all our suppliers for what was looking to be our busiest year yet! We were in the process of moving from our old 4 x 40ft containers into a huge underground bunker.

Fireworks have been prepared daily in readiness for our upcoming November season, waterproofing and cue stickers, being stacked onto pallets in show order etc.

International competitions were coming in quickly too, as were our wedding displays. Work in the office was being overloaded with Scott and Mark up too their neck in paperwork and emails. They soon realised they had to get another person in to work with them to release some pressure, this is when Tom came on board.

Then in March disaster struck!!! COVID-19 made an appearance and put the breaks on everything!

The months ahead following the pandemic were really testing times, going from our busiest year to date to being the worst was a hard pill to swallow. However, as everything looked doubtful there was a glimmer of hope with MLE’s Firework Champions competition, with their new COVID secure drive-in event. We might get to fire a show after all!

A couple of months passed, and we were given the green light that the event was definitely on. Scott got straight onto the computer and started the design phase, been capped at 4” shells this gave him more NEQ to play with and decided to go very technical with his design using a lot of single shots sequences.

The show was finally designed and signed of by the MLE team, checking NEQ weights and music choice. Now it was time to start preparing the show, as there were a lot of single shots in the show, we knew this would be a challenge due to all of our Europla Fins being used on an international show that was rigged pre Covid. After a bit of ringing around our good friend Rob from Komodo Fireworks agreed to lend us some. The show was all ready to go just the finalising of the hire vans, crew, and logistics to sort.

The weekend of the show came and most of the crew went down the night before and camped (in social bubbles) had a few beers and a good old-fashioned BBQ with our personal chef, Mel Sykes, massive shout out to you!!! This was the first time since the pandemic where we had seen other crew members.

On show day, the weather was stunning and the excitement in the Pyrotex camp was high, getting back out onto the field doing what we do best. Dave/Wayne on the shells, Tom, Nick and Stu on the cakes and slice positions, Scott and Mel on the front positions, Mark on wiring the FireOne system. We were all set up and tested by 2pm which made a nice, pleasant change. Scott & Tom did the final checks of the firing site. During their final checks Scott asked Tom if he would mind firing the show so he could enjoy the show that he designed, at first Tom was hesitant due to never firing a competition show using the UltraFire Software but soon agreed after Mark agreed to teach him in just 3 hours.

Come show time, nerves and tensions were high as we were first to fire before the other 2 teams, but another final check of the firing site and testing we were good to go! Scott wondered off into the crowd to take his position to watch his show thinking all was good…… 10 minutes to go……… Tom loaded the show into the FireOne Modules, it was not loading!!! 5 minutes to go………. Tom and Mark kept calm and reloaded the show into the modules again, this time everything was good!

The show fired and performed well from an audience’s point of view but from the crew’s perspective we could tell that a couple of slices did not function properly, couple of cakes were firing to fast, but overall, Scott was happy with his design, especially his numbers (22) that performed to perfection during the Pink soundtrack also his large gold glitter crossette finale that filled the sky with noise and colour.

The other two teams fired their display’s, and the results were in! We came in 2nd place. We were a little disappointed naturally, but just been back on the field with the crew again was a win and a huge moral boost with everything that had happened with the pandemic.

All the crew thoroughly enjoyed the whole weekend, which was topped off with some amazing fireworks, laughter and of course a fair few drinks. For that moment, it was almost like it was a normal weekend, no COVID, no pandemic, no stress, just good camaraderie, beer, banter, friends, and fireworks. Absolutely amazing.

We look forward to seeing you all again at Belvoir Castle 2021. 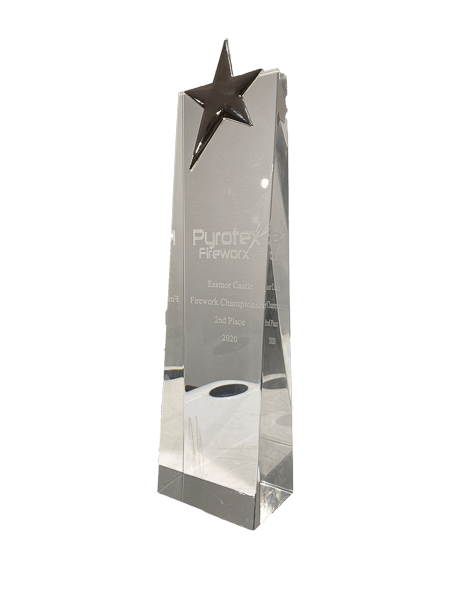