This year and every 5th year the champion of champions is held where the winners from the past four years take place in an ultimate battle of creativity and talent to impress the elite jury and citizens of Monaco to try and win the cavorted trophy.

The returning champions from the past four years were Surex from Poland, Zaragozana from Spain, Jubilee Fireworks from England, and Pyrotex Fireworx also from England.

The day after we arrived in Monaco, we headed down to the 200 metre promenade, which was better known as the firing site, over the next few evenings the site was transformed and the entire display was completely rigged, I’ve never seen a group of people change such a large space so quickly and efficiently as our team did, it was an amazing feat especially as there was over 2500 shells, 400 slices, 2000 single shots and 400 candles, our biggest display to date! A final check an hour before showtime and everything was tested and all errors rectified.

There was so much noise surrounding the display from the crowds who were all excited to see our fireworks display which was soon silenced by the eruption of the PA system where a voice boomed, Ladies and Gentlemen, please welcome Pyrotex Fireworx firing for England.

And then our show started to fire, it was perfect, I’ve never seen anything like it, the single shots were spotlessly clean as were the other sequences, a truly magnificent performance albeit a few cringe-worthy moments due to a couple of products that fired slow but aside from that it was perfect.

We knew it went well as we got a smile from Mark, who we all know is his own worst critique and is hardly ever happy with his displays, but we got a smile! While we were waiting for the results, we headed back down to the site to commence the huge clean-up. At some point during the evening we would find out the winner but we were calm for now, we did our best as a team and the display fired perfectly, all we could do was wait.

After a while, all that hard work paid off and we were crowned the winners! Champion of Champions. We were thrilled! the rest of the evening was a blur due to the excitement but I do know we finished the de rig at around 5am! The following morning, once we had all woken up, we saw Mark on the French news and realised it wasn’t a dream and we all headed out to Stars and Bars to celebrate the win. Safe to say I’m glad I didn’t have to pick up the 12 hour bar tab afterwards as we were there from 1pm in the afternoon till 1am the following morning! 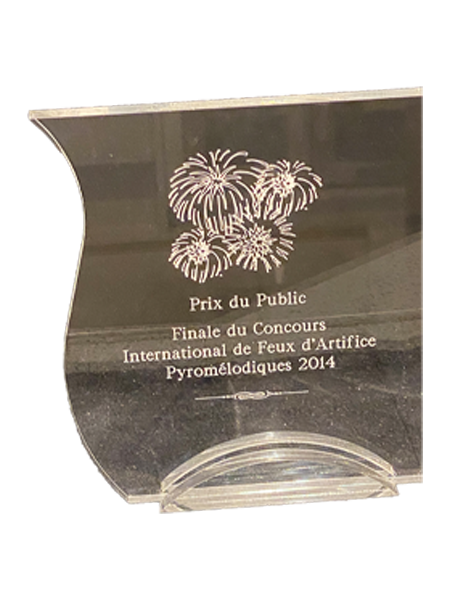